I was going to call this blog post "Moose wakes up from nap" and enter it for a "Lamest Headline Ever."  But Google tells me there is no such award.

I mean, there is no way I'm going to compete when there is a Hildebeast running around.  Note to future historians - take a look who is running for president in 2016 in the USA.

Anyway,  back to the moose saga.   When I last blogged about the moose, he was part of a family unit with his mom.  Well, word on the street is that mamma moose now has two new young ones, so the nearly grown galoof had to go.

Any way, I've bored you enough with word, so let me just get to the pictures. 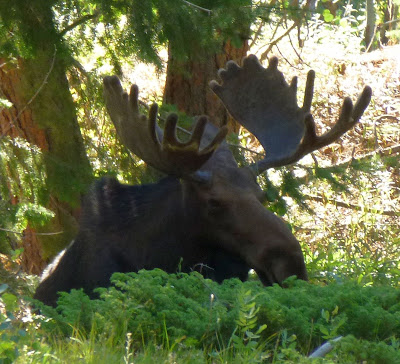 Then, as I checked at about 1:30 pm, the moose slowly got up from his nap. 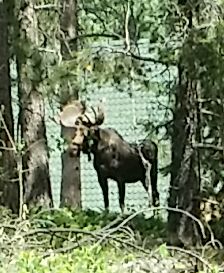 This second picture was taken with the roof of my neighbor's house as a contrasting background.  My neibhbor was the one who clued me in about 10 am about the loose moose in the first place.  By the way, the second picture was taken without the benefit of a telephoto lens - just cause I knew him as a baby doesn't mean he can't be a health hazard now. I'm not getting in a photo booth with him.