I now have the door by the kitchen closed because of the damage he caused to the storm door last time. The replacement security door has not been installed yet.

This time the bear pushed in a window screen before realizing that the hole was to small and high for him to get into the kitchen that way.

He then pushed in a second screen. However this knocked over a box of mason jars and lids. The resulting racket scared the bear and woke me up.

I woke up at two am to the sound of a rustling paper bag. I figured I had better see what the cat had gotten into.

I grabbed a flashlight and headed for the kitchen.

Something was not right...

As I looked around, I realized that the rustling sound was actually the sound of crunching aluminum. The screen "storm" door had the kick panel pushed in and a metal grill was lying on the floor. There were gashes in the window screen material.

I heard heavy footsteps recede across the deck and lawn.

I shirted around the trashed open storm door and onto the deck. A long trail of saliva started by the screen door and ran 12 feet to the steps at the edge of the deck.

Only a bear could have done that, but fortunately, he was more afraid of me then I was of him in my sleepy state.

It's a good thing I got there when I did because it would not have been pretty had the bear gotten inside and had a taste of food.

The next day, I asked about a bear proof storm door at Home Depot. I got some funny looks, and it seems they don't carry such a thing... Odd. But they do have some sturdy looking storm doors for about $100.

Posted by Unknown at 7:15 PM No comments:

Mysterious Sounds in the Woods

Yesterday, while working in the garden, I heard what sounded like horse snorts coming from the nearby woods.

After this went on for about half an hour, I went to investigate.

What I saw surprised me.

There, in between the trees where two huge bull elk! There racks were quite impressive. I beat a hasty retreat, mostly because did not want to disturb these large but shy creatures.
Posted by Unknown at 9:56 PM No comments:

Here it is a day before the summer solstice. Last night it snowed on Thorodin. But at the slightly lower elevation here we only got about 2 inches of rain. I'm looking forward to the wild flower explosion in a few days.

In other news, there were two bear sightings on the north side of Winiger Ridge yesterday.
Posted by Unknown at 11:25 AM No comments:

Here it is a day before the summer solstice. Last night it snowed on Thorodin. But at the slightly lower elevation ehre we only got about 2 inches of rain.

In other news, there were two bear sightings on the north side of Winiger Ridge yesterday.
Posted by Unknown at 11:25 AM No comments:

Yesterday, it Got so Cold the Hell Froze Over...

In fact it got down to -25 Fahrenheit. From what I understand this is not enough to kill the pine beetles that are destroying the forest.

In other news, my cat wanted to go for a walk today,despite the fresh snow. You can watch a video of Cloe the cat walking through the woods in the fresh snow below.

Also, a few days ago, I caught a heard of about 50 elk at the side of the road. If you listen carefully, you can even hear the males buggling.

What is a Dragon Fruit? 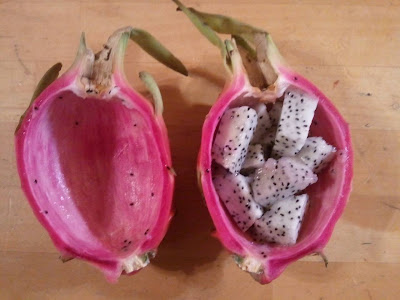 I'll admit, the above picture has NOTHING to do with what's happening around here, unlike most of my blog posts. However, I was adventure shopping at the Pacific Asian Market in Broomfield and I noticed they had FRESH dragon fruits. I had never seen this fruit fresh, only dried.

I HAD to try one and thanks to about.com, I learned how to get one ready to eat. The shell on the left has had the meat scooped out. The outer shell is not edible. The shell on the right has the diced meat in it. The black dots are seeds, like in kiwi. The meat is sort of watery, with the consistency of watermelon. It has a slightly sweet taste. It kind of felt like I was eating a "negative calorie" food, but after a few bites it grew on me and I had no trouble eating the all the contents of the fruit.

Published with Blogger-droid v1.6.5
Posted by Unknown at 8:40 PM No comments: