Today I heard my first humingbird for the year.

Then about 30 to 40 elk came through the yard and mowed my lawn a bit.
Posted by Unknown at 5:18 PM No comments:

X-C ski: To Go Where Only the Elk Have Gone Before 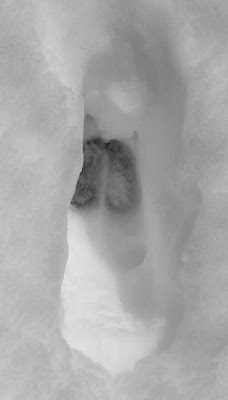 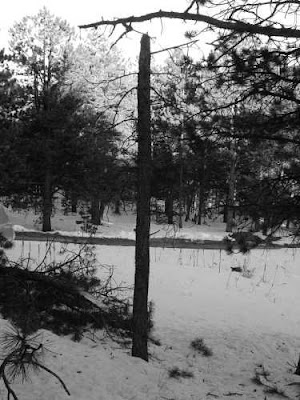 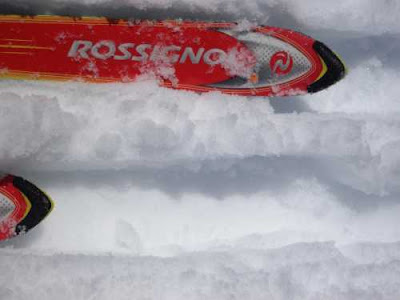 This afternoon I took the time to enjoy one of the "fringe" benefits of living up high in the Colorado Rockies - being able to x-c ski right out the back door in April.

When I got to the top of the ridge, I found that I was not the first one on the trail - a couple of elk had beat me to it.

The carnage to the trees from the weight of the snow continues to impress me. Full sized trees would be snapped off half way up. I've always wondered why there are some ponderousa pine trees around here that had a curious 'Y' shape to them. Now I know why. A previous storm had snapped of the top and the two nearest top branches would form a new top.

It appears that the last time this happened, judging from the maturity of the 'Y' shapes, was probably 20 or 30 year ago.

So, given this evidence, I can safely say that this was the worst storm in decades.
Posted by Unknown at 7:46 PM No comments:

Some more updates about the snow storm from my previous post.

It looks like this storm dropped more snow, by weight then the famous snowstorm of March, 2003.

This snow storm dropped over 4 feet of snow around here. That's over an inch an hour.

I noticed on our drive back on Sunday that I've never seen as many broken branches and trees every since I've lived around here. By the way, that explains why the power was out for nearly 2 days - the trees where overburdened with snow and took down power lines as they fell.

Today, the snow was melting down at a rate of about an inch an hour in the intense April sun. This has gradually exposed a carnage of broken trees and branches in the yard as well.

The good news is that the snow melted enough for me to be able to drive the Toyota truck all the way into the garage. However, turning around will be another matter. But, if the snow melts as fast tomorrow as it did today, the ground should be mostly clear in a day or two.
Posted by Unknown at 7:53 PM No comments:

This storm made the national news.

The following is a blow by blow of the snow storm of 2009 as told through an email thread. I have also edited out email addresses and certain other identifying details so that they will not end up on a spam list.

Yesterday (Friday) morning I was watching the snow pile up on the pick nick table outside my window on Lazy Z, when my gut whispered "Storm of March '03" You might remember it - it dumped 4 to 5 feet of snow in our neighborhood.

... THEN the power goes out. ... and I figured that the internet would not be far behind.

I love where I live, except when the power and internet goes out - so I bailed.

What I mean is: I beat a retreat to Boulder - the land of health food stores, free wifi, and (more) reliable power and snow plowing service.

Not that all is peaches and cream however. For example, I heard that the "improved" King Soopers on 30th is leaking like a sieve and is closed. However, the traffic is moving pretty well in the rain.

Rain down here... snow up there. That's the way it usually works this time of year, right?

Anyway, does anybody have enough electricity and digital bandwidth to give a report of the conditions in the PUMA neighborhood?

Excuse me for taking this long to get to my point, but I'd like to start a discussion about current road conditions on Magnolia as well as side streets such as Lazy Z.

Also, how's the power holding up? (No need to answer if you don't have any :-)

Power was off on on then off again about 6 PM last night. Still off until estimated 6PM tonight. This appears to be area wide. Snow is about 4 feet and stll snowing. Don't know how the roads are. Haven't finished plowing yet. I don't know if this will go to to the puma list. If you come up, post a note about the road conditions.

Sent via BlackBerry by AT&T

Just got my power back about 2 hrs ago on Pinon Way.

Mike -- I assume that you've made it back. Our internet was out until this morning. Briefly, here's what happened around here. A snowplow came down Lazy Z around midnight Thursday night, then not again until around noon on Friday. It was just before noon on Friday that the power went out. I was down in Boulder on Friday and returned between 5 pm and 6 pm, driving up Magnolia. It was totally marginal, even with our high clearance, all-wheel drive, and studded snowtires. There was about a foot of unplowed snow on this part of Magnolia and Lazy Z. The temperature got down to about 47 degrees in our house. Finally, a major snowplowing effort was made fairly early Saturday morning. The power came back on last evening at 8:50 pm -- 33 hours without power! (The weather bureau reported a snow guage 3 miles southeast of Pinecliffe with 53 inches of snow...roughly what I guess we had here.) Hope your feline is o.k. Clark

Thanks for the update.

Rachel and I are glad we sat this one out at the Golden Buff in Boulder.

We're heading back up after a good breakfast.

Thanks all for the updates.

We got back this afternoon.

About 1/2 mile from home, we suddenly found ourselves in the ditch because of a surprising thick,irregular and hard patch of snow, which was followed by a slippery mix of mud and snow. Fortunately, a neighbor yanked us out.

Right after that, it was my turn to try yanking another neighbor out. (Long, strong tow straps are a must have in the car up here) But this neighbor was much more stuck then I had been.

Just then Steven McCullum (from Blackhawk) came by with his backhoe. Steven pulled the neighbor out, then he came by to dig out my driveway. 1 hour and $100 later, he had made it all the way up except the last 100 feet. That was just to steep and the backhoe kept spinning its wheels in the heavy wet snow. ... but getting almost all the way up was good enough for me.

It was good to be back after two days and everything was just fine. Power and internet were both back on. The cats were really glad to see us (we had left lots of food and water) 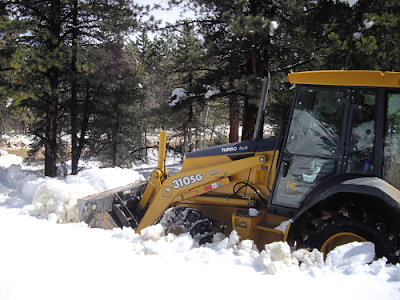 Posted by Unknown at 9:44 PM No comments:

In the past 9 days, we've had 3 significant snows. This is the time of year for heavy snows since the air has a lot of spring moisture in it.

Some Local Views of the Snow

Posted by Unknown at 7:23 PM No comments: