Dummy and the Bear 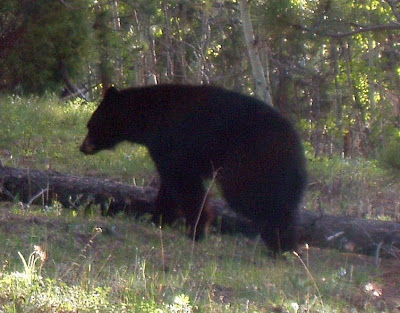 My curiosity got the better of me and I grabbed a flashlight and carefully (it might be a bear!) opened the door.

Whatever it was ran off to the right and was gone before I could shine the flashlight beam in that direction.

At about 7, we saw a large, dark brown bear wandering around the yard. (So it WAS a bear that I heard!) 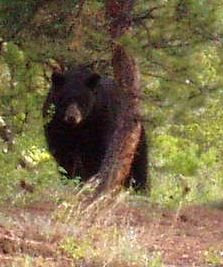 I got over a dozen pictures of it over about a 10 minute period before it wandered off at about 2 mph across the meadow to the west. The bear clearly knew I was there, but seemed indifferent, except to look my way a few times.

What kept the bear around for over 3 hours? Last night, I had thoughtlessly tossed a few remaining bites of rice from my cold dinner over the deck.

I won't be doing that again.

P.S. This bear was not interested in the hummingbird feeders, unlike the bear of the May 25, 2007 post. It did however bite into a plastic gallon jug that had just water in it once.
Posted by Unknown at 7:53 AM No comments: