I checked on the fire this morning.  There's no smoke to be seen.

Claire Farley  writes:
I happened to be on Winiger Ridge this morning, and I spotted a fire that there has been some conversation about. Here are the photos of what I saw from the cut out log seats at the top of Winiger Ridge after I called 911.

I don't know the current status of the fire but there was a big response. The fire was on the south side of the ridge and working its way uphill. My greatest fear was that it would go over the ridge into the densely forested north-facing slope. It appeared that a helicopter was working that edge of the fire to prevent that from happening.

Many thanks to all of our firefighters! 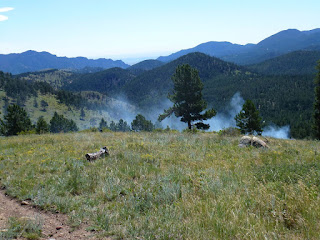 And my neighbor Clark adds:

Concerning the start of the fire:  I'm pretty sure we saw/heard the bolt
that started the fire.  I was near a window on the north side of our
house Monday afternoon, around 4:30 pm or 5 pm, when there was a
brilliant flash in the direction of the window and an almost
simultaneous enormous crash of thunder.  I didn't actually see the
lightning bolt, but it seemed to be in the direction where the fire
turned out to start.  We monitored the area for the next hour, looking
for smoke.  (As I mentioned in an earlier post, we are aware of no
lightning in the area since late Monday.)

What is disturbing is that the fire could smolder for nearly two days
before erupting into flame.  It should be a learning moment for all
concerned.  Some residents may recall the controlled burn on Winiger
Ridge about a dozen years ago.  A day or two after the burn, a neighbor
(there was nobody officially monitoring the aftermath of the controlled
burn) noticed smoke and reported it: the fire had flared up and escaped,
burning an additional 7 acres (only a few hundred feet from today's
fire).  A couple days after that, my wife and I stomped out flames from
the edge of the controlled burn farther east that were dangerously close
to the lodgepole forest north of the crest of the ridge.

There have been many small fires in the neighborhood during the last
weeks.  Today's event should teach us that the modest amount of rain
we've had recently has not cured the overall dryness.  We should keep
alert to smoke, especially where there have been small fires recently or
well-located lightning strikes.

Thanks to everyone for watching and reporting about these threats and to
the firefighters who responded very rapidly this morning.