Spring Arrives with a Loud Boing!

This morning, I heard a loud BOING coming from the large window while in the bathroom.

A quick look outside showed a bluebird sitting in the snow with a chunk of snow stuck in his half open beak. This bluebird certainly did NOT look happy.

In fact, I knew from past experience that such a stunned bird can easily slip into shock, especially when sitting on snow!

So we got out a box. But the confused bluebird had other ideas. As Rachel approached, it jumped from its spot on the snowy ledge right below the window into Rachel’s hair. He had the right idea, since her head was a lot warmer then the snow.

Rachel walked inside with the blue bird hanging on. 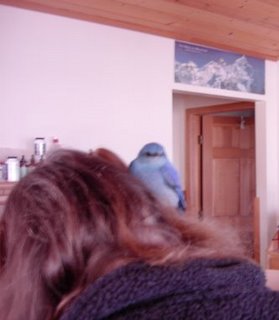 After this picture was taken, Rachel lowered her head into a large box until so we could get the bluebird to jump into the box. Then we put a blanket over th box so that the poor bird could rest and regain his composure.

About half an hour later, we heard scratching coming from the box. Rachel took the box outside and the bluebird, now his happy normal self, took of for the sky.

Birds arrive this time of year from their annual migration. Sometimes, the learning curve in their new environment can be a little steep. I've actually seen bluebirds repeatedly attack their own reflection in the window as they attempt to establish their new territory. I hope that this bluebird learned that he is no threat to himself as long as he does not do battle with his own reflection!

May we all find our happiness by learning that it does not serve us to battle with ourselves. Food for thought.
Posted by Unknown at 12:23 PM 2 comments:

The following site tracks what people find interesting and then posts the most popular. Come back often because the list changes all the time.

PS. I'd love to put their little widget here for doing this automatically, but blogger does not allow javasript.
Posted by Unknown at 10:09 AM No comments: