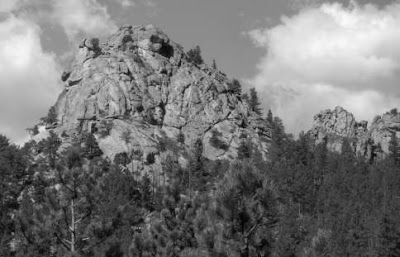 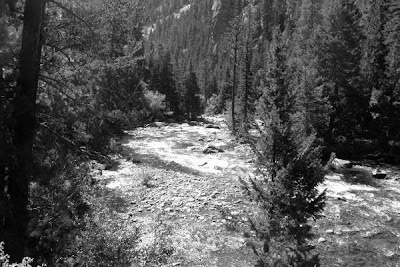 I've been slow to get these pictures up that I took while on a hike with my friend Janet Bychek up.

The first picture is of "Solstice Rocks." I call it that because the winter solstice sun appears to shine through a small arch at the very top of it.

The second picture is of Coal Creek canyon, about a mile downstream from Pinecliffe. The creek flows through a very rugged, remote gorge at that point on its way to Gross Reservoir. The picture was take from the north shore at a bend in the creek.

The two pictures where taken about a hundred yards apart.
Posted by Unknown at 8:11 PM No comments:

The Rest of the Story about the Mountain Lion

The following was published on the Daily Camera today. Of particular note is that the person that claims to have shot the mountain lion is from out of state, and that it is implied that he shot the lion in self defense.

This is a great angle if you're trying to minimize the consequences of shooting a mountain lion.

Cougar had attacked a puppy chained on the property

A man shot and killed a mountain lion outside a home up Flagstaff Road near Gross Reservoir after catching it attacking his puppy, which was chained on the property, according to the Colorado Division of Wildlife.

Wildlife officers are investigating the shooting Friday and are trying to determine whether the man was within his legal rights when he killed the adult cougar, division of wildlife spokeswoman Jennifer Churchill said.

“We’re investigating what will happen to the person who shot the lion,” Churchill said. “We do have laws that allow people to protect their safety and the their livestock. But this is the tricky gray area of it being a dog.”

The shooting happened about 1:30 a.m. Friday in a neighborhood just east of Gross Reservoir, at the west end of Flagstaff Road near its intersection with Lakeshore Drive.

Churchill said the shooter, whose name, age and hometown haven’t been released, is from out of state and was visiting a person in the west Boulder neighborhood. Three dogs were chained up outside the home, and several people inside the home heard the mountain lion attacking the dog in the early-morning hours, Churchill said.

“The people went outside and started yelling at the lion,” she said. “It wouldn’t drop the dog, so he got a shot gun to scare it.”

But the lion approached the man with a gun, Churchill said.

The puppy that was in its mouth is going to survive, Churchill said.

“He had a couple lacerations on his belly, around his neck,” she said. “He was in the lion’s mouth for a few minutes, so he had to get stitches and antibiotics. But he’ll live.”

Wildlife officers confiscated the lion and sent it to a lab for testing, Churchill said. She expects results back in a day or two, but it’s unclear when officers will make a decision on possible charges against the man who killed the cougar.

“We are still looking into it to make sure it was done appropriately,” she said.

One area resident, who didn’t want to be named in this story, speculated that the slain lion was responsible for killing a man’s pet miniature horse in the Nederland area Sept. 2 and a couple’s 60-pound Australian shepherd in Nederland on Sept. 27.

Officers with the Division of Wildlife in September tried to capture and euthanize the lion after it killed the horse, named Bodacious, but traps weren’t successful in snagging the cat.

Comments
Posted by Unknown at 2:59 PM No comments:

It turns out that there is a miss-communication about the picture that was published in yesterday's blog entry. I now find out that this picture is an EXAMPLE of a mountain lion, not the actual lion that was shot.
Posted by Unknown at 12:53 PM No comments: